do it for charity? 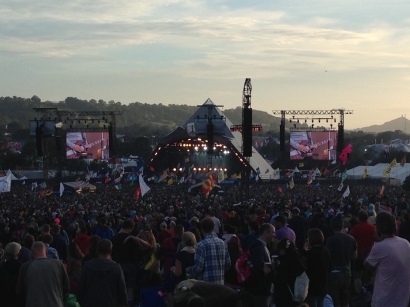 Glastonbury Festival is in no way exaggerating when it describes itself as ‘truly epic’.  Everything about it just is!  The amount of gluey mud, the variety of legendary bands and performances, the smell of the toilets (blurgh), the eclectic mix of people that go there and the sheer scale of the place.  It’s incredible.  But it’s not just the place that’s epic, it’s the epic things that happen there.  People honeymoon there (I know this because I was told so by a fellow festival goers flag).  People get engaged there (I just found out that one of Rich’s friends did – lovely).  People even get married there. 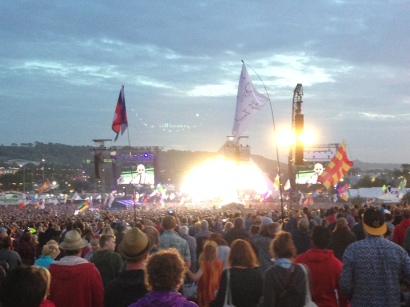 And there’s something for everyone.  If you’re not in to music, there’s theatre.  If you’re a fussy eater, there’s more than enough to choose from.  If you don’t like the mud…okay this one could be tricky, but even Paloma Faith, who looked stunning by the way, managed to totter around in those huge white heels that she performed in.  And you can experience this mass array of craziness at any time of the day in to the very early hours. 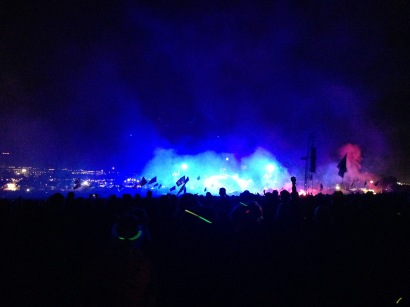 And the early hours were something that Rich and I became very accustomed to at Glastonbury and not because of the all nighter’s.  But, because when the sun rises and the music fades, and the really hardcore party people meander their way back to their tents, a new group of people emerge, bleary eyed and lacking in sleep, slightly perturbed by the task that awaits.  The Recycling Crew. 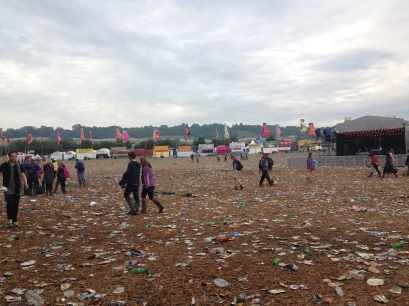 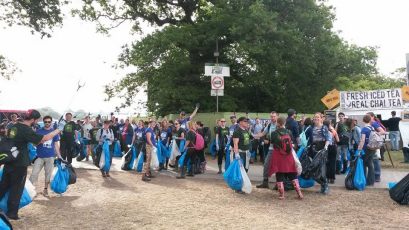 There are lots of brilliant charities involved with this but for the second year Rich and I worked for Kiota (an extremely wonderful charity helping to provide an education for girls in Tanzania).  We were two of the mysterious fairies that swept in and cleaned up the morning after the night before.  I won’t go in to too much detail, but tipsy festivalgoer’s who have managed to secure a space at the front of the stage during a headline act, don’t want to leave this hard earned space for anything (quite literally).

But despite the slightly grim reality of the morning after a festival and the litter picking job that lies ahead, at a time when the ‘love the farm, leave no trace’ phrase perhaps hasn’t reached everyone, the festival was in no way tainted for us.  Mainly because of the aforementioned ‘epicness’ that the festival provides.  And we came home feeling extra smug that, not only had we had an awesome time at Glastonbury, but we’d lent a helping hand to Kiota and Michael Eavis’ cows whilst being there. 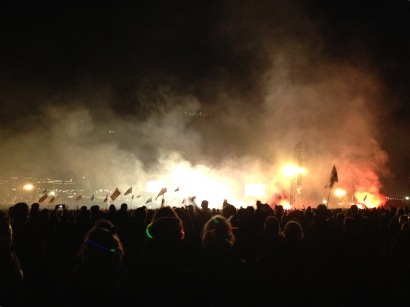 At this point, you may wonder how this relates to first dances, and, unless you’re planning on dancing your first dance in front of the Pyramid Stage whilst thousands of people jump and sing next to you (which could be fun), it’s really only the charity part that does.  Whilst wading through the sea of cans, bottles, clothes, shoes and a grip strengthener?! (yes, really), a thought occurred to me.  If you were a reluctant wedding dancer, would you be more likely to learn a routine and perform with your beau in front of your adoring friends and family if it was for charity?  What if you you were being sponsored to learn your wedding dance routine?

Giving to a good cause is a lovely way to take that step and do something that perhaps you wouldn’t normally do.  That way, you might be doing something that you find a little scary and intimidating, but it’s for a great reason.  What a lovely person you are!

If you like the sound of this, get in touch, learn your dance and encourage those guests to start sponsoring!  Add to the ‘epicness’ of your amazing day.

Thanks for reading!  Victoria x